I'm a Software Engineer with a passion for entrepreneurship and open-source software. This is where I write about software engineering, programming and lifestyle.

Compiling ClojureScript Projects Without the JVM 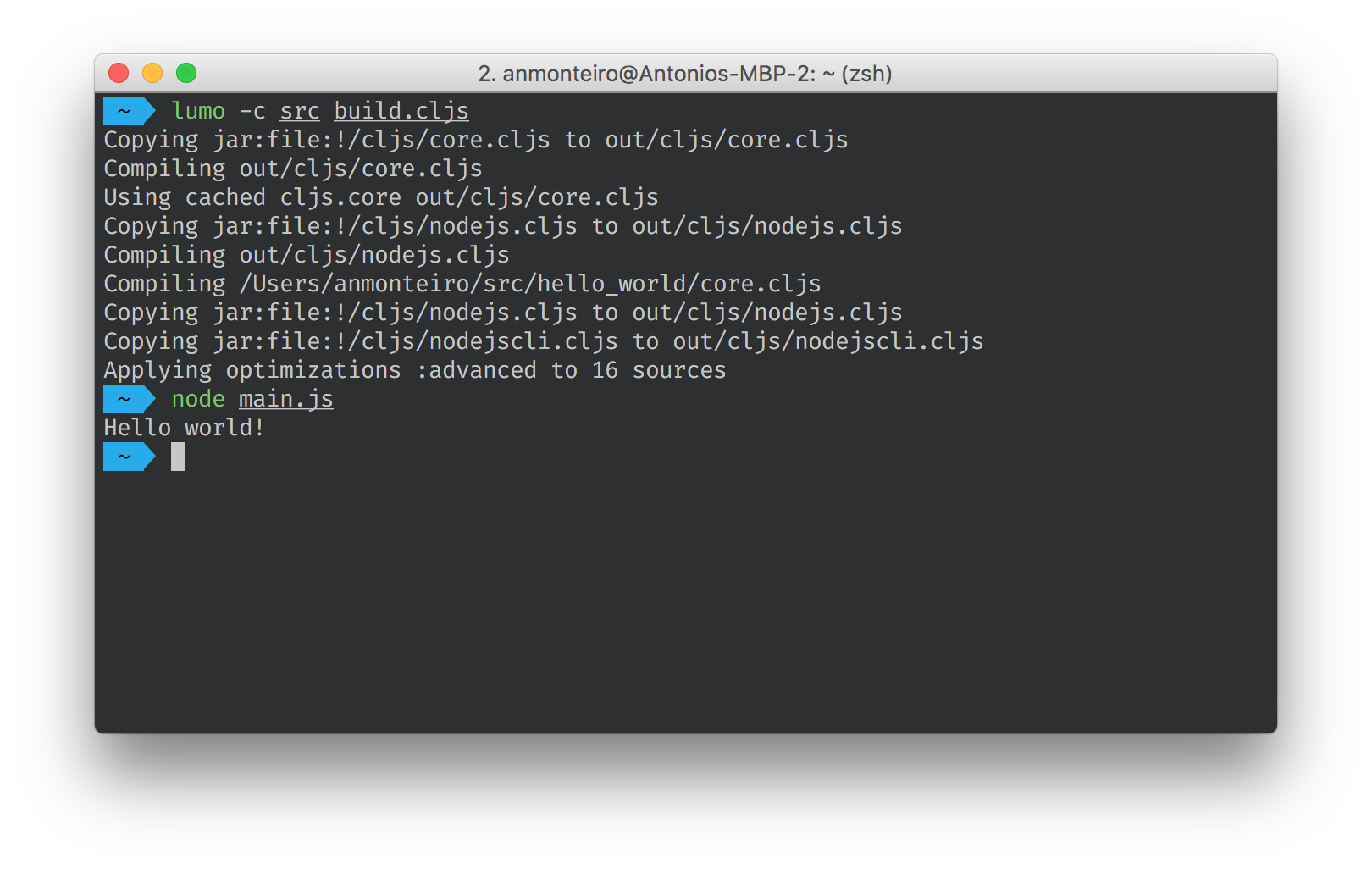 Making this work meant porting the JVM-based code in the ClojureScript compiler to work under Lumo and the Node.js platform. While most of it has been generally straightforward, changing the synchronous JVM build API to the self-hosted ClojureScript asynchronous API has represented the most amount of work so far.

Compiling ClojureScript projects with Lumo requires no external dependencies (such as the Google Closure Library) apart from those required by the projects themselves, as all the necessary compiler dependencies are bundled within the single Lumo executable.

Go ahead and install the latest Lumo release to try this feature out. Make sure you get the 1.2.0 release 1.

Take for example this small section of the ClojureScript Quick Start guide. By simply changing cljs.build.api to lumo.build.api, we can start compiling the Quick Start guide sample project without the JVM, today. Also, let's use advanced optimizations right away so we can see the JavaScript version of the Google Closure Compiler in action. This is what our build.cljs file will look like:

Let's now run the compilation script with Lumo. Don't forget to add the src folder to the classpath so that Lumo knows where to find the project. This can be done with the -c/--classpath command line option (hint: run lumo -h for all the available options).

After waiting a few moments, we should be able to run our newly compiled project with node main.js. How cool is that?!

This new feature isn't short of tradeoffs. The most obvious, and also the harder to solve in the short term are described below.

The Google Closure Compiler JS is a JavaScript port of the Java version, generated using GWT. That makes it take longer to optimize code when compared to the Java version. Furthermore, it also ships with fewer features than its Java counterpart, both because not every feature included in the Java version is portable to JavaScript, and also because it is a fairly new project, only announced in late August 2016.

This Lumo release represents a lot. To my knowledge, there exists no other effort to compile and optimize ClojureScript projects with the Google Closure Compiler without requiring a JVM installation. But we have only began to scratch the surface, and there's an equally large amount of work that remains to be done in order to achieve feature parity with the current ClojureScript compiler on the JVM.

This feature of Lumo should be considered pre-alpha, and we will continue to improve it over the coming releases. I decided to release it nevertheless, with the objective of gathering initial feedback and hopefully attracting a few new contributors to Lumo. Please report issues, and if you want to help, do get in touch (e.g. on Twitter)!

As a final remark, no JVMs were spawned during the process of writing this blog post.

1 Lumo 1.2.0 is still not in Homebrew due to technical issues. You can install from master with brew install --HEAD lumo.

*Thanks to Mike Fikes and David Nolen for reading a draft of this post.*
TweetFollow @_anmonteiro